The End of the World

In a not-too-distant future, the US has fallen into near social and economic ruin. As the fringe elements of society and ordinary citizens alike struggle to deal with the terrifying new reality, a maelstrom of governmental deceit and malevolence churns just beneath the surface.
Against this chaotic backdrop, strange new beings have risen out of the rubble. A former government worker, who in a fit of obsession and delusion steals and inhabits alien technology during a violent raid… A teenager whose reality contorts, making him privy to the cries of the dead as he stumbles in and out of worlds in a surreal game of musical chairs… Soon things take a dark turn for the newly emerged pariahs.
A long-running conspiracy involving a highly proficient military-industrial complex is attempting to resurrect an ancient horror, and the very outsiders laboring to cope with the dangerously altered state of the world might be the only ones who can do anything about it. 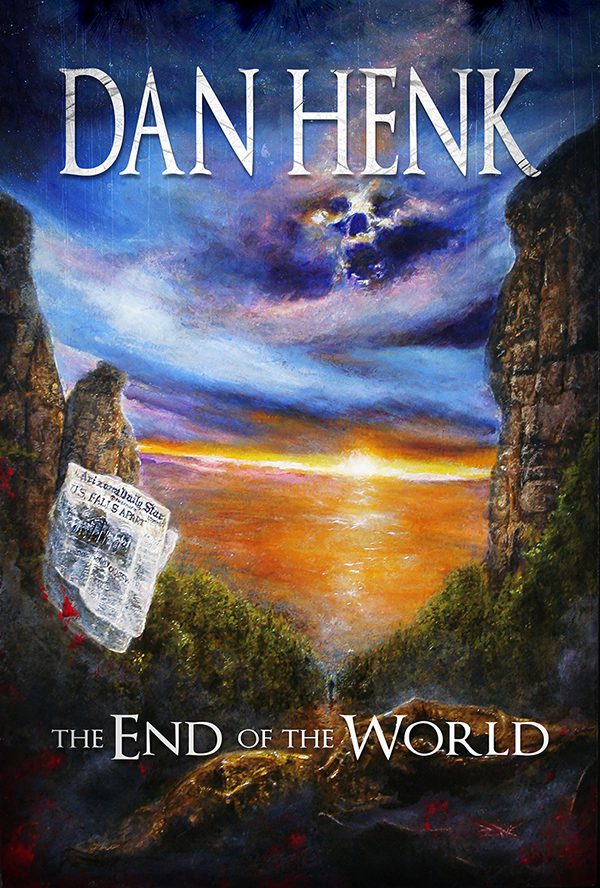 Terrifying, political inspired, sci-fi horror. Dan Henk's best work to date!
Jack Bantry
Author and editor of Splatterpunk
An ambitious and thrilling large-scale science fiction adventure! I loved it!
Jeff Strand
author of CYCLOPS ROAD
If you are in the select market for a tear-your-face-off race against the powers that threaten to engulf and destroy us all for their own ends, Dan Henk delivers again with The End of the World.
Ashley McGee
Dark Corners Reviews
Expertly written, with an unbelievably acute attention to detail, Henk is able to paint meticulous landscapes that we can step through and walk alongside his characters on their peregrinations. If you’re ready to peer behind the veil, remove the mask, and leap the wall to the other side of armageddon, your ship is waiting.
Boby Lisse
editor at large Rue Morgue Magazine
Henk’s ‘The End Of The World’ is a tale that packs more bare-knuckle punches than Charles Bronson’s time behind bars. In a novel bursting at the seams with creative genius, you’ve little choice but to strap yourself in and prepare for an onslaught of gritty-as-hell mayhem, as the world collapses from the provocative corruption of a bastardised government. Armageddon has never been so fucked up.
Chris Hall
DLS Reviews
Copyright 2017 DANHENK.COM | All Rights Reserved | Powered by TattooCloud